More than a breeding ground for scientific discovery
An ethnographic interview documented by Layla Maria
"At Burke it's very clear that, even though everyone has their own projects, there is a lot of collaboration and support between researchers and labs to find solutions that will eventually improve living for patients.”

If you look close enough, you can see that cultures exist everywhere, even in neuroscience labs such as those in White Plains' Burke Medical Research Institute. Labs are in their own world, with a community of researchers that work both independently and together at the same time. I interned at a lab in Burke, and I remember how, once I stepped inside, I was introduced to new customs, rituals, and jargon that I had to become accustomed to. Looking back on this, I decided to explore what it really means to work at a lab, and to find out the unique culture that they have.

I interviewed Sydney Agger, a 23 year old research fellow/lab technician at the Hollis Lab in Burke Medical Research Institute. She's from Cambridge, Massachusetts, and has had a science background even before she came to Burke:
"I got my first lab experience in a lab at Harvard University when I was a [high school] senior, and then spent the first two summers of undergrad interning at a biotech company in their neurology pre-clinical department."
She attained her bachelors of Science with Honors at Mount Holyoke College in Western Massachusetts, and started working at Burke right after she graduated.

the life of a lab technician

What activities do you do as a lab together (i.e. lectures, lab meetings, etc.) and when?
"Every other Wednesday morning we have a joint lab meeting with clinical lab, and for the alternating weeks we have a joint meeting on Fridays with another lab doing similar behavior in rats. We also have lectures every Tuesday , and occasionally other days of the week."

The heart of research...the people 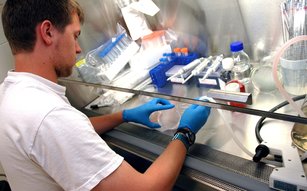 Are there any similarities/differences between your experiences at Burke and other labs you have worked in?
"There are a lot of differences between the biotech company that I interned in and Burke, the main differences being that Burke is an academic institute and the labs' funding has to be acquired through grant money, rather than private money in a biotech/pharma setting. This means that a lot is decided based on the availability of resources or lack of. I think there are benefits to it, but unfortunately I also think that this has a big impact on the research. There's so much emphasis on publishing and getting data to get grants, that I think it dictates a lot of how the research is being done." 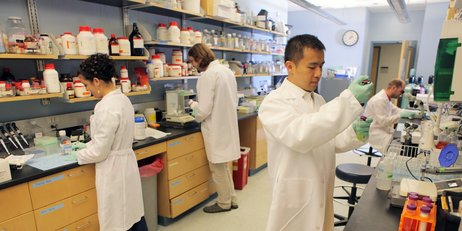 Are there rituals, language, or practices that are unique to your lab or to labs in general compared to the "outside" non-lab world?
"I can't think of anything specific that's unique to our lab. I think the nature of the field is just different than anything in the non-lab world because pretty much everything we do was designed specifically for research and science. A lot of the writing is unique to science fields because the content, purpose, and processes described are so much different than anything you'd find in business or humanities. The only thing that I can think of is that in research labs people generally wear comfortable casual clothing and normally at a full time job people wear professional or business casual clothing. You can always tell researchers from people working in business."

what is the culture of labs?

"The most satisfying part of research is working with other people to reach a goal, especially when there's a lot of problem solving that goes into completing a well-developed study." -Sydney A. 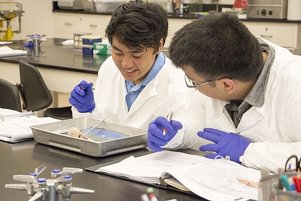 Not only do labs have their own visible shared culture, like the clothes and language, but labs have their own community that is interdependent on everyone's feedback and support. Just like Sydney talks about, it doesn't matter that everyone has their own individual assignments and projects to focus on; in the end, everyone is working towards a common goal together and everyone helps each other, especially in Burke. However, researchers are not just supportive of each other regarding their assignments and tasks, but in the overall lab community. Something that I realized in this course is that everything depends on the people in the society; certain languages used, like ones spoken within a family, can bring people together. Cultures are defined by the people in them and their pattern of behaviors/actions. I discovered that certain places, like parks, serve purposes in cultures in which they provide a safe, comforting, and familiar environment for people in a community to relax and talk to others, even if they have never met each other. 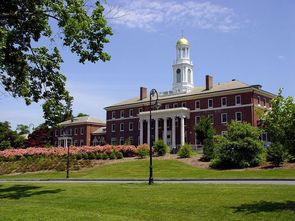 ​     However, just as a supportive environment can be cultivated, so can a cutthroat one. Just as I stated before, the lab culture is contingent upon the people. Sydney recounted of when she applied for another lab position, where the PI was busy and there were a lot of post-grads. As a result, competition was a main motivator in that sub-culture. Nevertheless, this difference still displays that the culture of labs rely on the people, and the environment and customs they develop, because it was a result of the competition between the researchers that gave rise to this cutthroat environment. 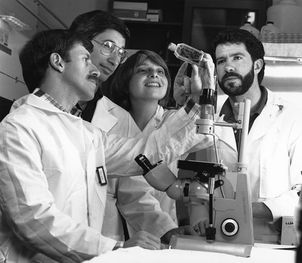 As I looked back at her words, I noticed that a lot of the time, she used "we" and "us" in reference to her lab and her research, even when Sydney described things relative to her own tasks. I bolded every time she used a collective pronoun or word to illustrate that the unity and support of the community shines through, even when it is unintentional in writing. I believe this depicts how the culture at Burke is one that is inclusive and close-knit. When I interned at Burke over the summer, this is definitely something that I experienced. On my first day, everyone was very welcoming and happy to help me whenever I was confused, no matter if I was in their lab or not. Plus, every time it was someone's birthday, we would always buy cake and celebrate by ordering food for everyone at a restaurant. Above all, this showed me that there is an expectation for teamwork and an emphasis placed on being a part of a whole community, just like researchers play one part in the grand scheme of a scientific dilemma. 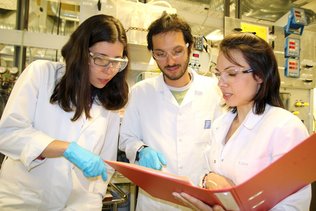 Sydney showed me that the stereotypical image of a researcher--independent and isolated person who works long hours and is cut off from the rest of the world socially--is, in actuality, the opposite of the truth. I discovered that researchers are actually a part of a bigger picture both socially and academically, whether that entails collaborating with others to discuss their work or bonding at movie nights.
All of this indicates that the people in a society play a huge role in the culture's customs and rituals. This fact is clearly seen in labs; in fact, after I interviewed Sydney, it became especially clear to me that labs, and subsequently their culture, revolve around the people: it is the people who make up the heart of the lab and the research, and the people who create the environment in labs that can either be cutthroat or supportive. Sydney discusses how the people in labs can "make or break" one's experience. Since the people at Burke hold many events to bond and relax after a long week--events like happy hour, barbecues, and even daily lunches where people can spend their time talking and laughing--there is a supportive lab community at Burke that bonds both through lab meetings and lectures, as well as barbecues and movie nights. Regarding the scientific aspect of labs, lab meetings and lectures allow researchers to obtain feedback and look at their projects at a different angle. Regarding the more social aspect of labs, these events give the people of Burke the ability to bond and become even closer, fostering an environment where it is easier, and even encouraged, to collaborate and exchange ideas. All of this showed me that labs like Burke are truly a place where scientific collaboration, social connectedness, and teamwork flourish.
*The above photos used are a variety of images of several labs accessed through the internet, not from Burke*